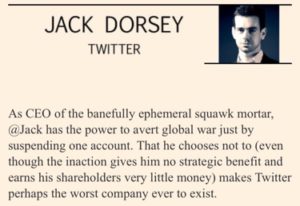 Imagine you’re on a party. There’s lots of people around most of which you don’t know. But you stand with a couple of friends and are having an interesting discussion when a complete stranger barges in and angrily interrupts you. You politely ask him to leave you be but he starts getting seriously annoying and when you call him out for being a ass he starts threatening you.  Would you consider this normal? Would you condone the mans behaviour? Would you expect the host of the party to stand by you if the conflict escalates?

Or how about this: You stand at a public space, maybe a square, talking with your boss. Again an annoying stranger walk up and starts screaming in your face. Would consider this a reasonable thing to do? And even though the man has a right to be where he is, and indeed say almost anything he likes, would you consider this a place to spend time?

Visualising interactions in terms of physical spaces makes it pretty clear why Twitter is such a failed company.

Twitters stand of free speech, namely that not only do you have a right to express whatever you like, you also have the absolute right to force anyone to listen to you (the equivalent of our examples above), is extremely naive and counter-productive to any kind of civilised conversation. It creates a place that for all intents and purposes appears to be made for trolls.

This is nothing new, but the real problem starts with the fact that Twitter refuses to address the problem. It has created a platform which is perfect for trolling, and they refuse to change it. Given the abuse and threats and malevolent behaviour of some of their users, this actually becomes a moral problem: Do you want to support a company that behaves like this?

I don’t have a personal problem with trolls or abuse on Twitter for which I am grateful. I am also enjoying some of the very interesting people I can get to read of there, but as some point the last couple of months I decided that this is no longer a company I want to support. I’m just one user, and not an influential one, but I can vote with my feet and stop using a service which I now consider borderline immoral.

So there you have it Twitter: you’re the negligent host laughing at your guests when they get trolled and I for one am leaving the party. I enjoyed it for a while and I’m sad it came to this but you really must start to protect those that came to party instead of those that came only to wreck the floor.