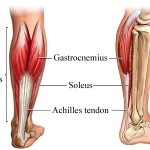 Another week another chapter in the hurting calf. The Tuesday I went to a new doctor, namely Idrottsdoktorn.se (literally “the sports doctor”). After listen to my whining, having me hop around on one leg, doing fall outs, squats and various other tricks like such an old dog he passed verdict: I’ve had an inflammation where the Achilles fastens in the calf, and as I continued on training, even though the inflammation actually went away, the pain didn’t. The condition have a Latin name that sounded authentic, and which I promptly forgot. But the bottom line is that there’s actually nothing wrong with my calf, apart from the fact that it is hurting that is.

He also noted that my core stability needs to be worked on, which I’ve already guessed, and likewise with my ankle stability, which I haven’t. Also I could do with limbering up a bit, but he wasn’t overly concerned with that. Now he’s passing me along to a naprapath who’s expert on running to give me some concrete training tips for my calf (eccentric training), and core and ankle stability.

Then the week went on, but after two beers after work on Friday I couldn’t help noticing that my calf was… not hurting at all. And when I bounced around my living room I couldn’t trigger the “normal” pain any more. Naturally, with two beers in my body, and a vicious lust to run I couldn’t help myself, which leads us to:

Friday, 5km: And by damn! First run since late February completely without pain! Whooho! I went round in the woods around the corner. Got punished badly by the verticals, but took it easy and walked bits. I can really feel now that I haven’t been able to train properly for a while. But it is a lovely spring, and when I came back it felt like a huge weight had fallen off my shoulders. I’m running again!

A big fat hint: Despite my attempt to play with my footing the last weeks to find out what the problem is, I was far from the truth. I started the Friday run with 1km barefoot, and… That was a completely different step. On both feet. When I took the shoes off, both feet stopped pronating, I landed squarely on the middle on my soles, and my big toe got involved much earlier. Damn difference it made too!

Sunday, 5km: I was hesitant about going out. I wanted to run, but I wasn’t sure if it was too aggressive. I warmed up, took a couple of meters barefoot and then was pushed over by the glorious spring weather. And it seems it worked. No pain, and I had to hold myself back like an old racehorse not to speed up. Again I started with 1km barefoot, and after that the rest of the run was exactly as I want it: smooth and light.

So here’s to hope! Taking the shoes off made a huge difference in my gait. Now. I. Must. Not. Over. Do. It. Easy does it. Calma, calma…